This doc will explain in depth how slab rebalancing works in RAM cache. We will cover the following aspects: 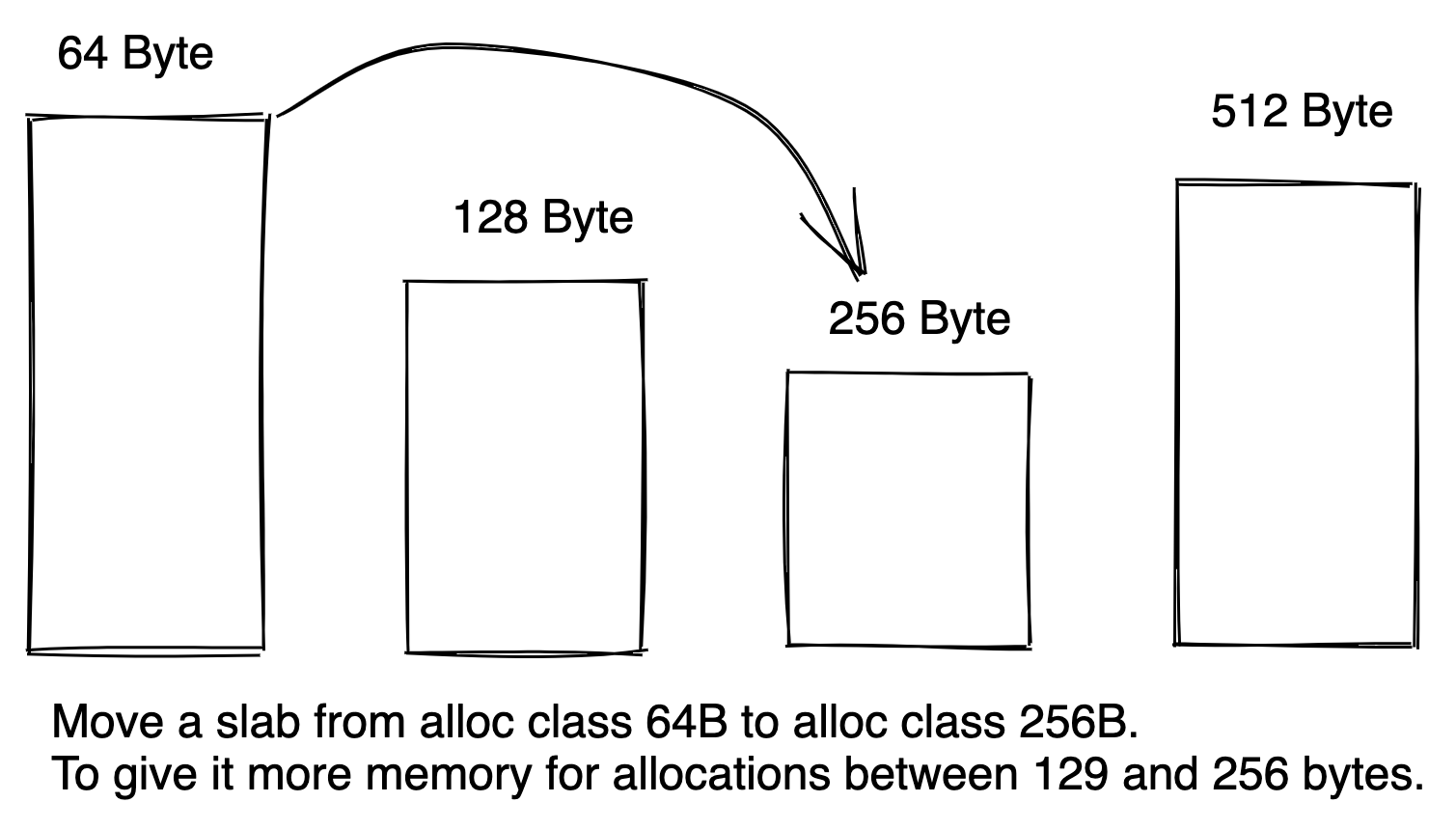 To rebalance, we first pick a slab from an allocation class, and then evict or move each item in the slab. After that, we can free this slab, and give it to another allocation class. Slab rebalancing is an intra-pool operation. However, moving slabs between different memory pool (due to pool resizing) follows the same logical operations. Now, let's walk through each step in slab rebalancing in details below.

1. Why do we need to rebalance#

This design means that the number of slabs in each allocation class depends on the allocation request pattern before a cache is warmed up. In a hypothetical scenario, a use-case may request only 100-byte objects during the day and only 1000-byte objects during the night. This means with a naive slab allocator design, if we start up a new cache during the day, by the time night arrives, we do not have any available memory for 1000-byte objects, and are unable to evict anything because all items in the cache are 100-byte. 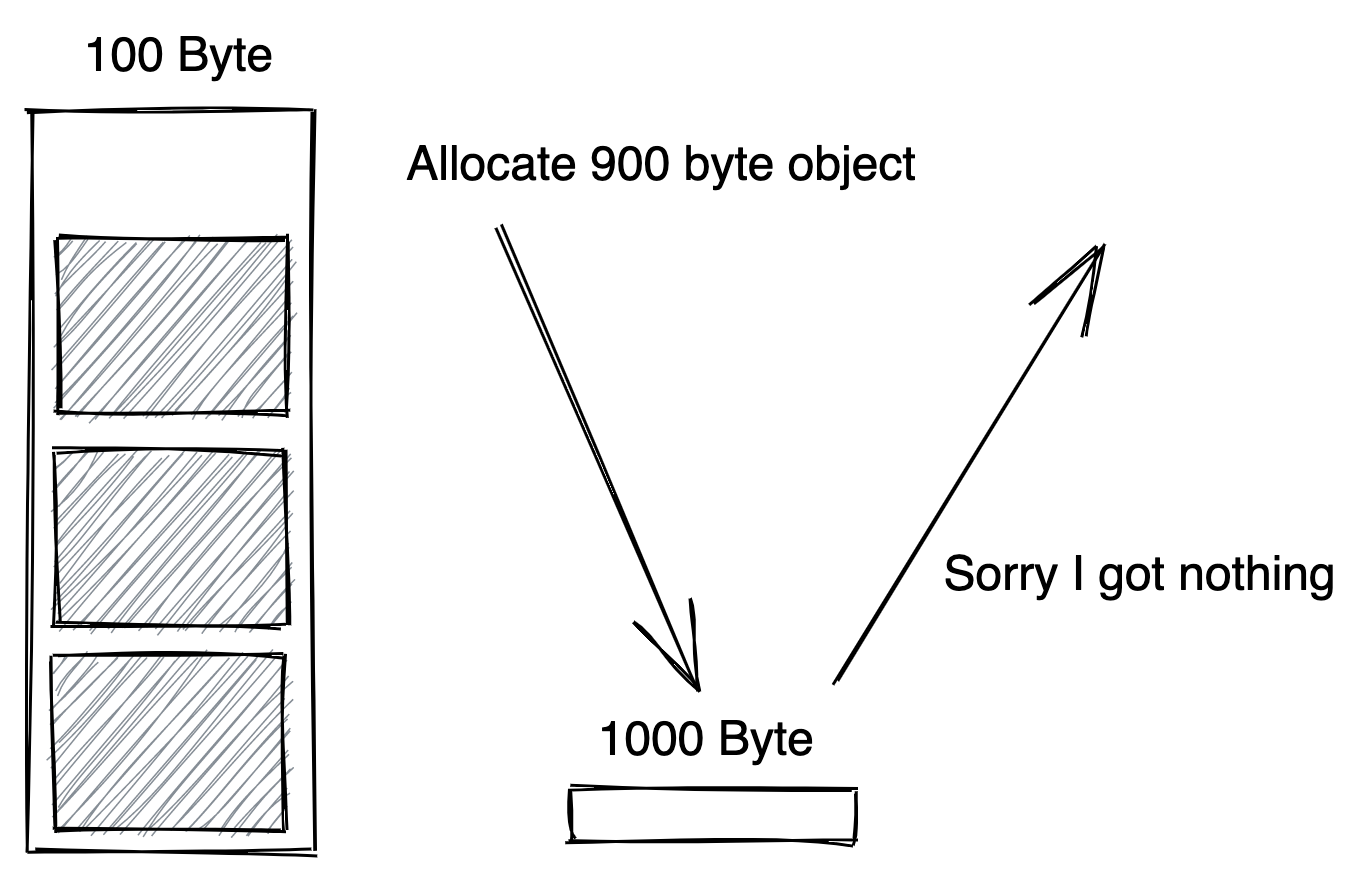 There are several objectives for moving slabs around.

Note that 2 & 3 are often times opposite goals. A cache may get a lot more "get" requests for objects within a certain size granularity, if we move as many slabs to that size to maximize the "hits/byte", we will maximize objectwise hit rate, but at the expense of the cache retention time fairness for objects of a different size.

Once we have picked an allocation class as a victim for giving up a slab, we will pick a slab at random (we do this by taking a slab from the end of the allocated slab list in an AC).

3. How do we maintain strict LRU ordering#

Once we have picked a slab, we have to release it. CacheLib follows the following algorithm for slab release:

Note that 4(a) is self-explanatory; we're just evicting everything still active in this slab until the slab is devoid of any allocations still being used by the user. 4(b) is the more involved one as the goal here is to maintain strict lru ordering. The way it is done is as follows. User is responsible for choosing which algorithm to use for step 4. 4(b) is enabled if user specifies a moving callback (memcpy or some custom callback logic).

When we evict from the tail of the LRU to make room for the item we're "moving". We make sure we only evict an item from another slab. Note we may actually evict an item that is in the same slab currently being released. This is fine as it is both rare and also that later on when we get to that item, we will move it again to a new allocation. The overall "move"s we complete are still bound by the number of active allocations in the slab.

4. How do we handle chained items#

Chained items enable user to tie several allocations together to form a single lifetime. Conceptually, they're a linked list of allocations. User first creates a parent item, which has a key, and is the head of a chain. Then user will create children items, which do not have a key, and append them to the parent one by one. Each allocation in the list can be of a different size. On eviction, we evict the entire chain. This poses a challenge to slab rebalancing. We must ensure when we choose to evict allocations during slab release, we must also evict any chained items to the allocations. Similarly, when we choose to "move" allocations during slab release, we must re-link any moved allocation to their chained items. Eviction for Slab Release 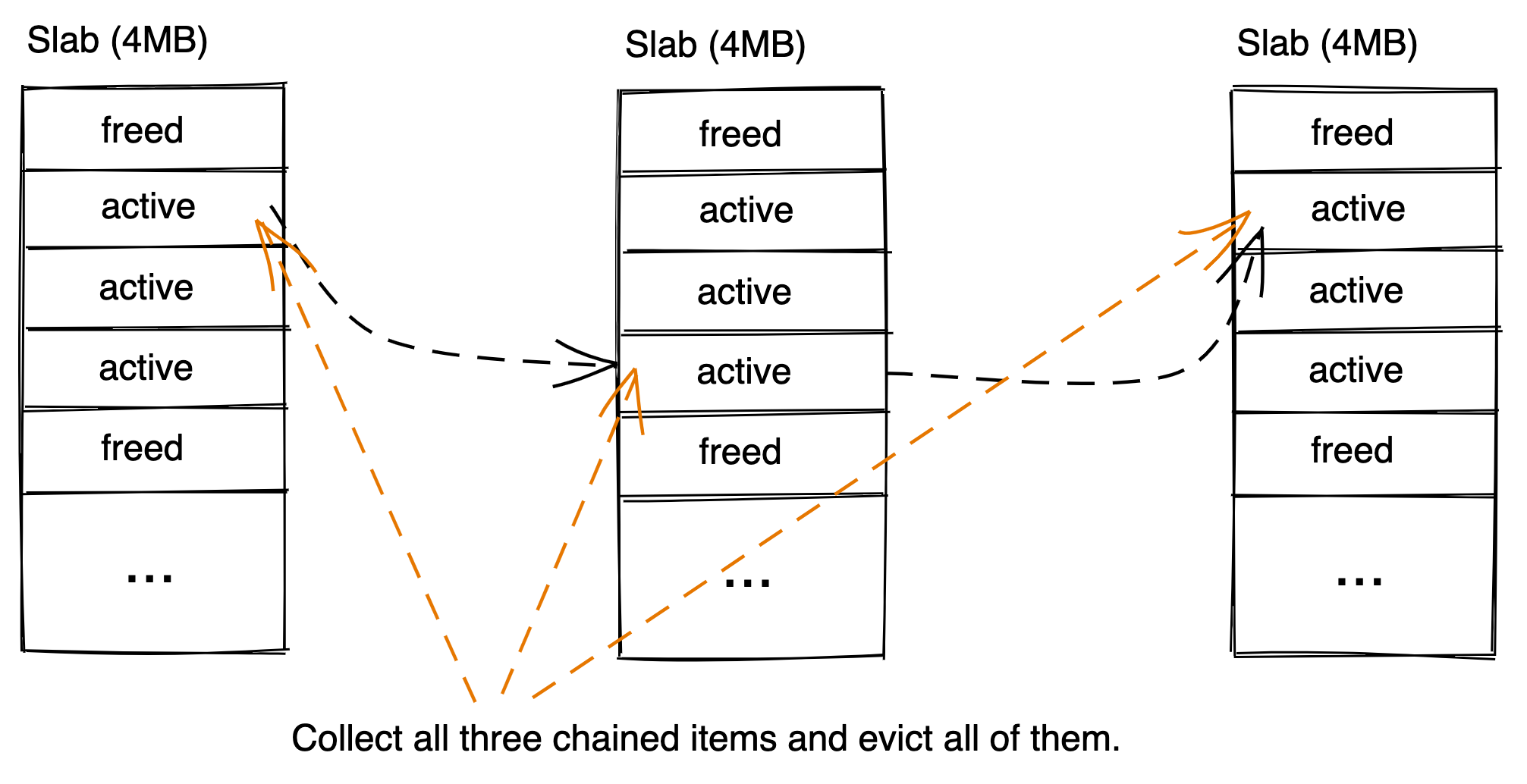 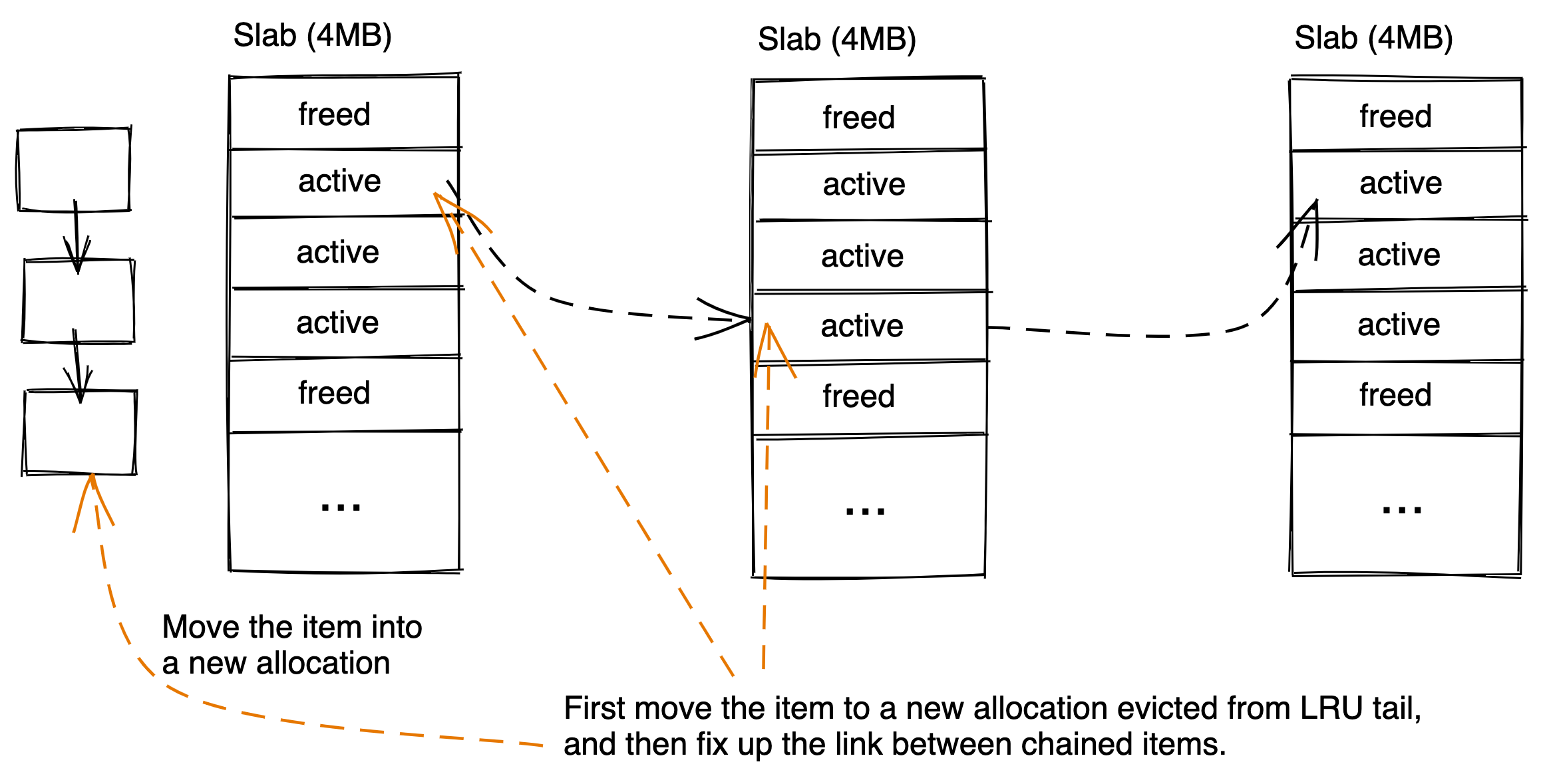 5. How do we synchronize#

We synchronize all operations via atomic flags in each item's header, and the use of eviction locks and chained item locks (if involving chained items). The goal of synchronization is to ensure the following:

Alternatively, if we're moving this allocation (4(b) algorithm in section 4), we grab eviction lock and chained items similarly as above. But instead of evicting, we will grab an additional (and optional) user-level synchronization primitive (we call it movingSync). This primitive is supplied by our user and it is usually a read-write lock our users use to guard mutation into item content in their code. For obvious reason, we don't need this for immutable workloads. Once we have the locks, we allocate a new item, call user callback to "move" the old item into the new item, and then fix up any links if involving chained items. Finally, we atomically swap the entry in the hash table so the new, "moved" item becomes visible to the user.